WE LOVE ROLE PLAY opens on the 4th of each Month *

COLLABOR88  opens on the 8th of each Month

THE CHAPTER FOUR opens on the 4th of each Month

THE FANTASY COLLECTIVE opens on the 20st of each Month*

THE SECRET AFFAIR opens on the 15th of each Month*

GENRE opens on the 15th of each Month*

THE ARENA opens on the 5th*

SHINY SHABBY opens on the 20th of each Month

“Duchess, Kynne, and Sorchiee managed to get back to the base camp by dusk. Kynne was looking much better after Sorchiee had made a tincture of wild Death Cap Mushrooms and Belladonna. In the wrong hands the tincture would be certain death, but mixed with some boiling water and mint leaves it would relieve the stress from Kynne’s head and strengthen her from the inside out. The camp was in full motion when they returned. A rabbit was on the spit, the tents were all set up, and the girls had been busy mending wounds and making Kynne a comfortable place to rest. Kynne resisted complaining that we were all being pushy Mother hens and that she was perfectly fine but she relented and smiled when a bowl of rabbit stew was placed before her. ‘She’ll be right as rain in the morning.’ Sorchiee said to the others. Duchess looked over at halfwraith who clicked her teeth. ‘How the hell were we so easily defeated? This is complete horse shit!’ Halfwraith growled in frustration. The others nodded in unison. ‘I…I’m not sure why we were so easily run off. You know, Tam Tam mentioned to me the other day that perhaps we should approach the creature in a different manner. perhaps in a diplomatic one?’ Sorchiee raised a brow and looked to the others to see their facial reactions. ‘DIPLOMATIC!?’ Halfwraith spit out. ‘Diplomatic my ass. That beast is a complete nuisance and I intend on making it burn…”

Alright, alright, alright… I know. I haven’t been writing out my reviews and that’s super wrong of me. Ha! Sheesh, I didn’t know you guys cared so much for my opinion 😀 Well, if ya want it I’ll share it. We Love RP‘s June round opens tomorrow and with it some fantastic loveliness is coming your way! I was so inspired by my look today that I created a new RP character. Ha! Okay…well, that’s for another day/ let’s dive right in, shall we? Meva released these stunning feathered creations for WLRP and I am totally dead over them. They are so beautifully textured and I’m just super obsessed. I really don’t know what else to say about them. I mean…look at that majestic glory! DAY-UM. Let’s be honest…I totally wanted to prance around naked with them, but…I don’t think I would have been allowed to do that at The Arcade Gacha. Anywho. I threw on these fucking amaze-balls leather pants from Azuchi. Dude. They are bananas. Zoom in on those suckers and check out that texture work. Brilliant! And Una‘s stunning “Ireila” set just looks so perfect with them. It’s available in a ton of colors and the set is comprised of this stunning top and skirt, collar, and bracers. It’s badass and it’s all available tomorrow at WLRP! OH! See that adorable fairy ring in the background? That’s from Figment for WLRP and it’s out-of-this-world adores!!!! If my excitement isn’t evident by my abuse of exclamation points, then I don’t know what to tell ya. Go check it out tomorrow at WE LOVE ROLE PLAY!

P.S. My skin is from PUMEC and it’s my new favorite skin ever. Dude…shit is on point! It’s available at WLRP. 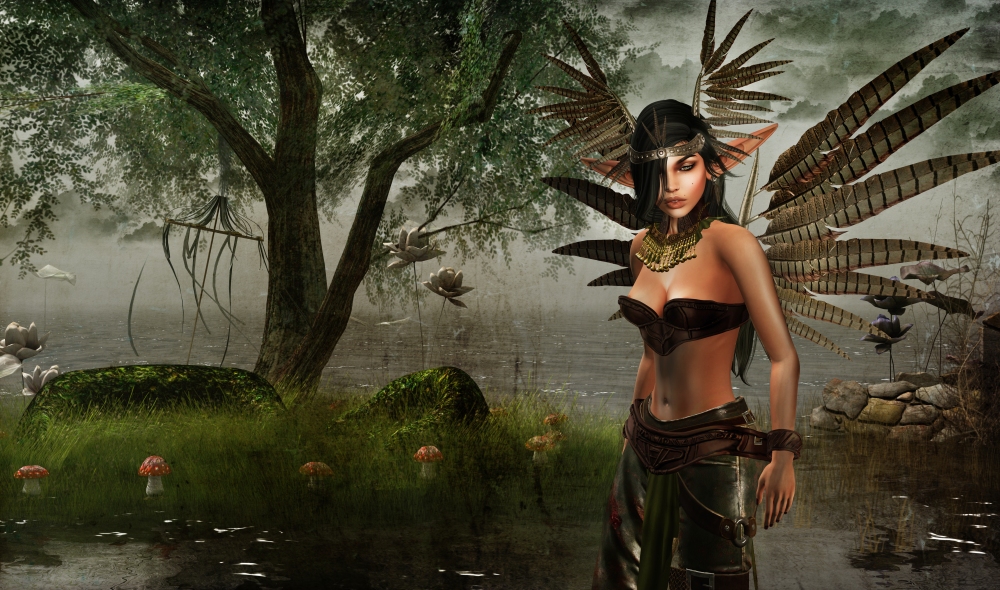